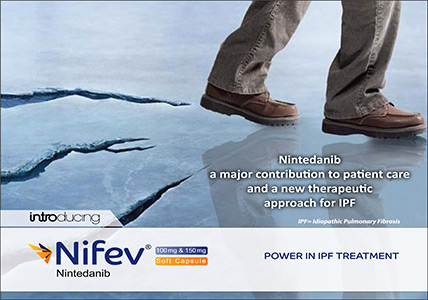 Unimed Unihealth Pharmaceuticals Ltd. has proudly introduced first ever and only Nintedanib Brand in Bangladesh as “Nifev”.

Nintedanib is a major contribution to patient care and a new therapeutic approach for IPF, SSc-ILD and Chronic Fibrosing ILDs with a Progressive. Unimed Unihealth Pharmaceuticals Ltd. has proudly introduced first ever and only Nintedanib which is available as Nifev 100 mg and 150 mg Soft-gelatin Capsule- Power in IPF Treatment.

Nintedanib is approved by USFDA for three indications, which includes IPF, SSc-ILD and Chronic Fibrosing ILDs with a Progressive Phenotype. It is proven by 5 randomized, double-blind placebo-controlled trials over 2400+ patients. And 80000+ patients have taken Nintedanib worldwide.

Unlike Pirfenidone, Nintedanib has a proven mechanism of action. Nintedanib is a multi-targeted tyrosine kinase inhibitor that inhibits pathways involved in lung fibrosis. It binds intracellularly to key receptors that have been implicated in the pathogenesis of lung fibrosis in ILDs. Those receptors are- Platelet-Derived Growth Factor Receptor Alpha and Beta (PDGFR-α and β), Fibroblast growth factor receptor 1-3 (FGFR 1-3) and Vascular Endothelial Growth Factor Receptor 1-3 (VEGFR 1-3).

Nintedanib is a disease-modifying agent proven to slow progression by reducing lung function decline. It demonstrated reproducible reductions in the annual rate of FVC (Forced Vital Capacity) decline across 3 clinical trials. In INPULSIS-1 clinical trial, 52% relative reduction in FVC decline was found, in INPULSIS-2 and TOMORROW which are 45% and 68% respectively. And FVC decline is a robust and reliable marker of IPF progression.

Nifev offers your patients dosing that is one 150 mg capsule, twice daily. Each capsule should be taken approximately 12 hours apart. It should be taken with food and swallowed whole. In those with mild hepatic impairment (Child Pugh A), 100 mg twice daily is recommended.